The Indian state has escalated fascist attacks against the people with the new laws enacted in recent years. The arrests and massacres of workers, peasants, students, women and organisations of different faiths who oppose the oppression and exploitation of the state and use their democratic rights by organising protests are increasing every day. Many leaders of democratic movements are arrested and sentenced to life imprisonment.

The political defence of those arrested is prevented, the lawyers defending them are arrested and threatened with death. Lawyers are prevented from taking the cases of political prisoners, Muslims, Christians and Delites, and lawyers who do not comply are threatened with arrest.

Attacks on the pioneers of social and political struggle are intensifying!

With the coming to power of the Modi government, fascist attacks on the people have intensified. There is a great resistance against these attacks in all sections of the people. Strikes of workers and peasants, street actions of women and youth, actions organised by Muslims, Christians and Delites against exclusion and contempt are growing every day. Fascist attacks against the leaders of these actions are also intensifying. Many leading workers, writers and intellectuals are being detained and sentenced to life imprisonment. The rights of arrested prisoners, especially women prisoners, are being violated, oppressed and tortured.

By arresting intellectuals and writers, scientists and pioneering activists who have been prominent in the democratic struggle of the people, such as RDF (Revolutionary Democratic Front) leader Professor Saibaba, revolutionary writer Varavara Rao, Professor Anand Teltumbde, the people’s struggle for democratic rights and freedom is being tried to be prevented. Although many of those arrested are seriously ill, their treatment is being prevented. Professor Saibaba is one of them. Since Saibaba is ninety per cent disabled and unable to meet his daily needs, he is not released despite all attempts by his family and lawyers, and is almost left to die.

The attacks against women prisoners in prisons are even more extensive. Sexual violence against women has become a part of daily life and no one opposes it. Women’s hygienic needs are not met and feudal patriarchal rules are imposed.

We call on you to support the struggle of Political prisoners in India!

We call on Europe to be a voice in the campaign launched between 13-19 September to put an end to the attacks on workers, peasants, students, professors, religious minorities, Delitese people, women and other oppressed groups in India. We call on you to support the just struggle for an end to the attacks on the people by the Indian state and the imperialist powers that support it. We call on all political prisoners in India to raise their voices through joint actions for the fulfilment of their basic rights and for the end of sexual violence and torture, especially against women. Let’s join the protests we will hold in front of Indian consulates and embassies in Europe on 13 – 19 September and embrace the struggle of the prisoners and the resisting people.

Political Prisoners in India Must Be Released Unconditionally!

Prisoners’ Basic Needs Must Be Met! 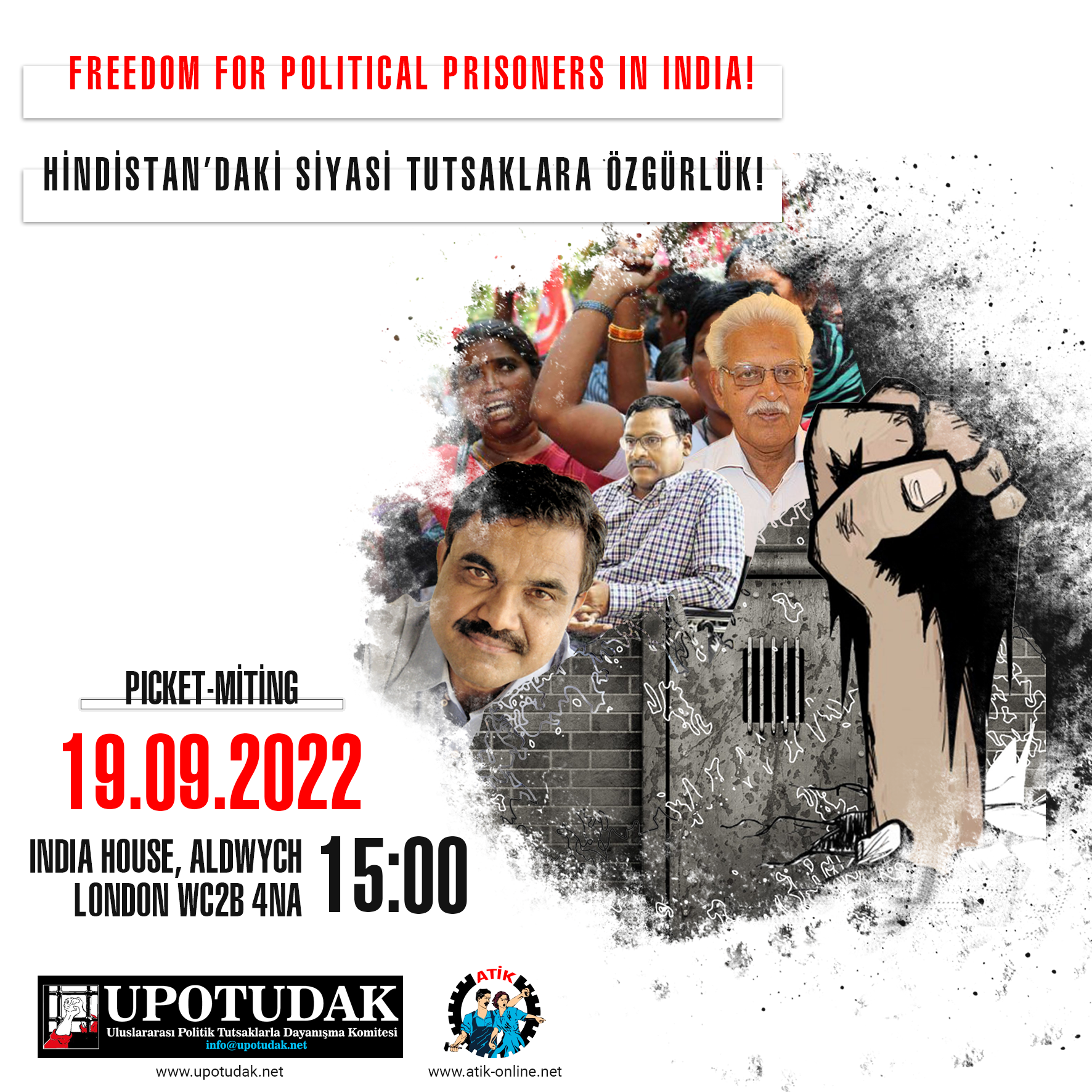 UPOTUDAK-Freedom for Political Prisoners in India!

WE HAVE NOT FORGOTTEN THE 19 DECEMBER MASSACRE AND RESISTANCE; WE WILL NOT LET YOU FORGET!