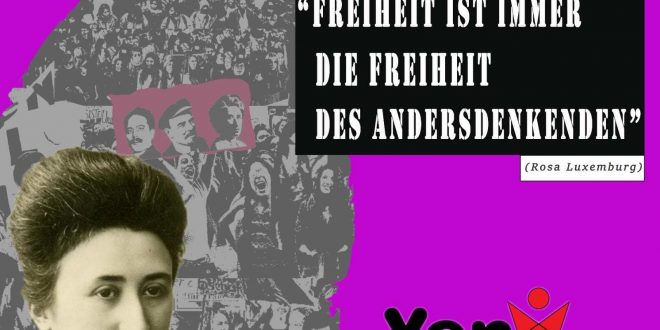 Yeni KADIN: “Rosa Luxemburg will continue to live in our struggle!”

WE HAVE NOT FORGOTTEN, WE WILL NOT FORGET!  ROSA LUXEMBURG WILL CONTINUE TO LIVE IN OUR STRUGGLE!
Rosa Luxemburg was a rebellious woman who devoted her life to the class struggle and was not deterred by any
kind of repression and oppression. Rosa Luxemburg was a woman who embodied several characteristics: she was a
Marxist theoretician of the class struggle, researched, analyzed and wrote numerous writings. She was a good orator
and agitator, philosopher and socialist. While in her lifetime analyzing and writing theoretical writings was one of the
activities of a man, she resolutely declared war on the patriarchate.
Socialist Rosa, with her political and ideological stance, taught us women the qualities of a leader. So she is still one
of the leading and well-known names of the class struggle and also in the fight against sexism and patriarchy.
January 15th, 2019 marks the 100th anniversary of the murder of Rosa Luxemburg and her comrade Karl Liebknecht
by German imperialism. 100 years ago, they were murdered for leading a determined struggle against the policies of
war and exploitation of the ruling powers and against capitalism.
Within this one century, Europe and above all Germany became the scene of the Second World War and of fascism
and the deaths of millions of people. But in defiance of all powers, the common struggle of the people has
succeeded in defeating fascism with the teachings of Karl, Rosa and Lenin. The women who had to suffer the most
under fascism, stood with all their courage before the enemy and took up the fight for their freedom on the front line.
But already at the beginning of the 21st century in Europe political and economic institutions as well as the
institutions inherent in the system had a strong shift to the right and also a social acceptance and dissemination of
fascist ideologies. Racist and fascist parties in almost all European countries have made their way into parliaments in
recent elections with an immense increase in votes, so they can actively participate in decision-making.
While the Federal Republic of Germany, which represents the political and economic leadership within the EU, also
takes the lead in terms of fascization and in the sense of racist rollback, the number of attacks against the working
class and the oppressed has increased. Of the anti-democratic laws passed recently, the progressive and leftist
forces in the country are particularly affected, but these attacks are directed against the whole population. Because
by these attacks a subservient society is to be established.
Right-wing populist politics is gaining in popularity due to anti-migration and misogynist rhetoric;
The wars of the imperialists in the Middle East, which they lead for their own interests, have once again claimed
millions of lives, injured and expelled. Millions of people have fled to Europe, hoping to build a new life here. While in
Europe social cuts are increasingly being driven forward by the rulers and people are experiencing ever greater
financial problems, the right-wing populist and fascist parties have used the fleeing migrants as an opportunity to
declare them guilty of those policies and thus gain votes.
At the same time, the fascist ideologues are trying to win votes by showing themselves to be especially women-
friendly and allegedly advocating women’s freedoms, even though it is the racist and fascist ideologies that push
women into classical roles and make their lives hell. Already at the time of the German fascism under Hitler the
social tasks of the woman with the so – called “three K – kitchen, children and church” (German: Küche, Kinder,
Kirche) were described, which again today among other things with slogans like “the increase of the child money and
financial subsidies and aids for more children’s births” to gain social approval. The fact that these promises also
receive approval is shown by the numbers of right-wing populist voters. But the real goal here is to push the women
back into their homes and banish them from social life. They should surrender to imperialism, fascism and patriarchy.
Rosa Luxemburg continues to live in our struggle!
Despite all these developments, there is resistance – and in times of historically great importance, women in
particular have important tasks to tackle. Just as yesterday, it is immensely important and necessary to read and
understand Rosa Luxemburg’s writings and to learn from her theses and her life. On the 100th anniversary of her
murder, we commemorate her. The memory of them will live on in our fight.
 Lenin, Luxemburg and Liebknecht live – the immortal leaders of the proletariat!

Paylaş
Önceki YDG Frankfurt: “We shall not forget the Roboski Massacre!”
Sonraki Freedom For Muslum Elma